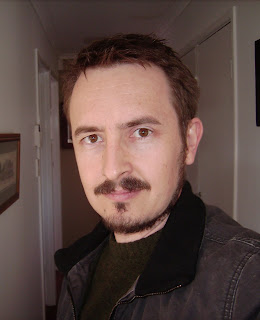 The Fringe Magazine was excited to have the opportunity to catch up with local author, Trent Jamieson again. With the release of the last book in Trent's Death Works series, it was a good chance to chat about how the series have been going and what plans Trent has lined up for his next book.

The final book in the series, The Business of Death, has been released as an Omnibus, containing all three books in the trilogy this month. Keep your eyes out at all good bookstores for the conclusion to this exciting Australian series.

Scott: Thank you very much for taking some time out to have a chat with us at The Fringe Magazine. I’ve been eagerly waiting the final book in the Death Works Trilogy to come out this month. How did the book launch go?


Trent: Hi Scott, thanks for having me! The launch is still a few days off, so I’ll let you know. But if it’s like any of the other launches at the Avid Reader bookstore it will be all types of incredible.

Scott: Last time we spoke you were working on book 3 in the series. What have you got planned now the trilogy is done and dusted?

Trent: I’m working on a few other projects, and finishing up another series. You never know which one is going to take, but right now, I’m enjoying all of them.

Scott: It’s been great reading the Death Works series, especially with in set in Australia. What made you decide to wind up the series in a trilogy? I would love to see the series continue on longer as I’ve enjoyed it so much.

Trent: There’s always the chance that there might be more books, particularly if the trilogy does well. I know what happens next, and have even written a few chapters, so you might get your chance to see the series go on a bit longer. I guess I wanted to tie up loose ends in the last book (not all of them, but most) because, well, you never know which book is going to be your last, and I think trilogies allow for a good story arc. 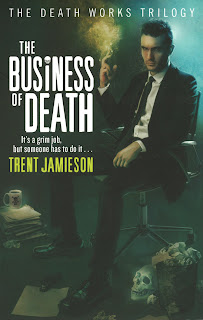 Scott: Most of us aspiring authors would love to give up full time work and concentrate on our writing career. Has this been possible for you now with the release of three novels?

Trent: I wish! I work at the Avid Reader bookstore (as a casual) so I don’t really wish, I love working there. It not only helps with the bills, but keeps me sane – writing is a solitary activity, working in retail anything but.

No matter whether or not you work or write full time, it is very much about managing your time. I did write full time for a year, and that was a whole other sort of discipline. To be honest, I don’t think it’s for me. I like talking to people too much.

Scott: Do you have a favorite character in the Death Works series and what about them do you like the most?

Trent: Oh, what a cruel question! I think I like Lissa the most, I really think that she grows as the books continue, in fact, I’ve always been tempted to write a story from her point of view. She’s much stronger than Steve, and she doesn’t have his powers. I think I love her a little.

I’m going to cheat and throw Wal into the mix as well, he’s the perfect comic foil to Steve (Oh, and then there’s Mr D. See how hard this is?).

Scott: Hachette and Orbit are great local companies. How did you first form your association with them? 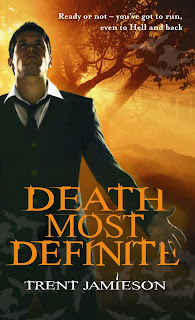 Trent: The same way all authors do, I guess. I sent them my work, and was lucky that they liked it enough to publish it.
They’ve been a great company to work with, their editorial team is superb, actually, everyone is, you really feel that they’re behind you and the book. And it’s that confidence that can really help you get through the tough times. 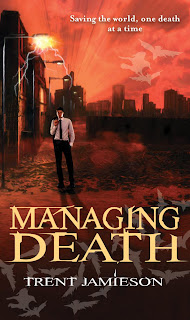 Trent: Well, if they were to be companions I’d want Krissy Kneen (whose book Triptych comes out in a month) because she is just an amazing person, and would ask all the right questions and come up with the wildest escape plans. I’d want Margo Lanagan because I reckon she knows how to handle herself in a wilderness environment. Marianne de Pierres because she rocks and is tall enough to see over the horizon – I mean a ship has to come eventually. Max Barry because he always seems to have his head screwed on properly. And Christopher Currie because he seems to appreciate my dad jokes. How could we not all have a great time? OK, they’re all Australian authors, but why not, eh?
Scott: Thank you very much for your time; look forward to reading your next book.
Trent: Thanks Scott, I really appreciate you taking the time to ask such fun questions!
Posted by Scott Wilson at 1:34 AM

just thought I'd let you know that the launch was a blast! It was at the Avid Reader bookshop and you couldn't have hoped for a better venue or a better crowd.