BOOK REVIEW: Against All Enemies 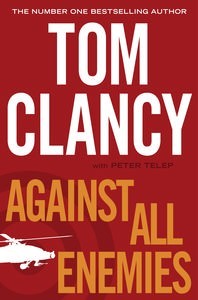 Title: Against All Enemies

The master of international intrigue and explosive action introduces a new hero for a new era of warfare . . . against a new kind of threat.

For years, ex–Navy SEAL Maxwell Moore has worked across the Middle East and behind the scenes for the Special Activities Division of the CIA, making connections, extracting valuable intelligence, and facing off against America's enemies at every turn.

When Moore arrives at a rendezvous to take charge of a high-ranking Taliban captive, the meeting takes a horrific turn that neither Moore nor any of his bosses saw coming. Barely surviving, he tries to bring to safety a Pakistani colonel with information about the debacle, only to have that mission fall prey to forces more powerful and cunning than any he has faced before. Undaunted, and with failure not an option, Moore continues his quest for the truth, leaving many dead in his wake—killed by those for whom secrecy is the ultimate weapon.

And then . . . a shocking revelation: Two of the greatest threats to the security of the United States have forged an unholy alliance. After years of planning, the Taliban has come to terms with a vicious Mexican drug cartel for which they will supply opium. For the cartel, it is a matter of money, power, and ultimate control of the drug trade. But for the Taliban, it is an opportunity long awaited: to exploit the cartels and bring the fire of jihad to the hearts of the infidels.

It is up to Moore, and his team, to infiltrate and dismantle the drug cartel, even as they hunt for those who would bring the ultimate terror and destruction to the streets of America.

In a story that races from the remote, war-scarred landscapes of the Middle East to the blood-soaked chaos of the U.S.—Mexico border, Tom Clancy once again delivers a heart-stopping thriller that is frighteningly close to reality.

Let me first start by stating that I’ve always been a huge Tom Clancy fan, since his first book The Hunt for Red October right up to his latest book. Tom’s books have always been a real treat, with well flesh out characters, intrinsic plots and great technical detail. While there may be no real surprises with the outcome of the books, they are still a damn enjoyable read.

As with many other well known authors of today, such as James Patterson, Robert Ludlum (yes I know he has passed away but his name is still used on new release books based on his creations) and Clive Cussler, Tom has started with the co-authoring lesser known authors. I’m not sure how much or how little of Against All Enemies was written by Clancy, but if you can’t tell, then does it really matter anyway?

Max Moore is a former Navy SEAL who is working with the Special Activities Division (SAD) of the CIA. He's a new warrior for a dangerous time, possessed with a skill set that combines lethal fighting abilities with a canny intelligence and an almost inhuman amphibian capability that made him a legend among his SEAL instructors. Clancy and Telep insert Moore into a battle with two fronts, resulting in a long but always engrossing tale that will keep you up and happily bleary-eyed for at least a couple of nights.

The basis for AGAINST ALL ENEMIES is a story that has circulated for several years, strongly confirmed by some and vigorously denied by others. There are variations, but the main thrust of it concerns an unholy agreement between one of the Mexican drug cartels and the Taliban, involving drugs and access to the United States at its southern border, with one dirty hand washing the other. Specifically, the Taliban would supply opium to the cartel, while the cartel would provide the Taliban with the unprecedented opportunity to bring its unholy jihad to the heart of the United States.

Moore, fresh off a disastrous mission --- times two --- in Pakistan, is itching for a bit of payback to the Taliban, and the crack team of which he becomes an extremely important part gives him the opportunity to provide just that. Clancy is known as a master of detail, and his in-the-room descriptions of everything from SEAL training to prisoner interrogation to the breathtaking opulence that drug money pays for has to be experienced to be believed. But Clancy and Telep do not get so bogged down in details that the story suffers. AGAINST ALL ENEMIES is vintage Clancy in brand-new clothes, with Moore every bit as memorable a protagonist as the iconic Jack Ryan.

Moore's target is a major Taliban leader whose plan to bring the war to the United States is as brilliant as it is audacious. Moore is used to playing with a team, and each member of his unit brings a unique set of talents.

This is another great thriller by master storyteller, Tom Clancy.
Posted by Scott Wilson at 5:21 PM