BOOK REVIEW: Across the Divide: Navigating the Digital Revolution as a Woman, Entrepreneur and CEO 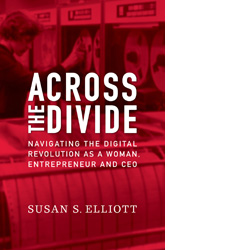 
Across the Divide recounts a 50-year journey of epic proportions in technology, from the 1960s when transistor-tube computers filled spaces the size of football fields to widespread adoption of PCs in the 1980s, and finally into today’s world of web-based cloud computing.

Undeterred when IBM policy forced her to leave her job as a punch card programmer when pregnant, Susan S. Elliott went on to form her globally successful company Systems Services Enterprises (SSE) which today produces a series of highly successful custom eLearning and mLearning solutions.

Across the Divide is not only an interesting account of the rapid evolution of computer technology and an informative and instructive guide to achieving success in the world of business, it is an inspiring story of a woman’s dedication and passion to succeed, no matter what the obstacles. Susan’s wins and perseverance are impressive and inspiring; the positive energy jumps off the page.
Review:
Across the Divide: Navigating the Digital Revolution as a Woman, Entrepreneur and CEO is an inspiring autobiography by a woman who made a career during a time when women weren’t supposed to be anything in the workplace other than secretaries or typists. You are probably like me and have heard of IBM but never a genius who worked there in the 50’s called Susan S Elliot. Some of the ideas that she presented were instrumental in changing many areas of the IT during the early years.
Reading about what working life for a woman was in the fifties and sixties was pretty amazing.  It is hard to believe how different employers acted towards women fifty years ago. Susan was quite lucky with a number of circumstances that allowed her to gain a footing in a company like IBM in a position that most women could only dream of. Kind of makes you understand how success is just as much luck as it is hard work. You can be a genius and not successful if not in the right place at the right time. Well Susan used her luck to start her own company when pushed out of IBM when she became pregnant with her first child.
Apart from a personal account of the rise of a woman in the IT industry, there are many interesting details about the development of computers, data processing and the workplace in general over the last fifty years. This is an extremely educational and informative read.
Overall, this was one of the most interesting autobiographies I have read about someone who I’d never heard of before.
Posted by Scott Wilson at 2:02 AM