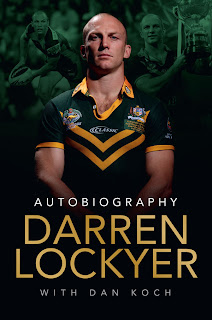 The Rugby League superstar’s end-of-career autobiography - a must for every Queenslander!

In 2011, NRL fans will have the chance to share in a piece of rugby league history. The game's record books will be re-written, some taken to heights unlikely to ever be matched. Darren Lockyer will celebrate his 34th birthday this year. Of those 34 years, 17 have been spent putting his body through hell in perhaps the toughest football competition on the planet. Lockyer has, quite literally, spent half his lifetime in the NRL. By season's end Lockyer is set to hold the all-time appearance record for club, state and country. It is a feat no less a judge than Wayne Bennett declared would never be equalled.

The remarkable longevity of Lockyer's excellence has earned him the respect of fellow athletes around the world and the adoration of fans everywhere. But while undoubtedly one of the most recognisable athletes in Australia, Lockyer has largely maintained his privacy, rarely, if ever, allowing fans a look at the man behind the man.

In this book Lockyer, for the first time, opens up on the people, places, incidents and events which have shaped the life and career of an Australian sporting icon. From his days growing up and working at the family-owned truck stop on the outskirts of the tiny Queensland town of Wandoan, to his arrival at the Broncos as a teenage sensation and subsequent ascension toward rugby league immortality the book will shed new light on some of the biggest names and stories of the past two decades. Contributions from Lockyer's family and friends, as well as legendary figures like Wayne Bennett, Wendell Sailor, Andrew Johns, Mal Meninga, Johnathan Thurston, Gorden Tallis, George Gregan, Ricky Stuart and Craig Bellamy gives this book a unique edge, with each providing readers a rare insight into their view on Lockyer the player, the leader and the man.

In Darren Lockyer’s autobiography he covers so much that it is hard to believe that is only 400 pages long. With over half of his life in the media spotlight as a world famous sporting celebrity, it is no wonder that he had so much to say, especially as he has somehow managed to live a relatively private life. The timing of the autobiography coincided with his last game at Suncorp Stadium.Lockyer opens up in the book about the people in his life from his parents to the late Cyril Connell and master coach Wayne Bennett.

Some other topics that Lockyer talks about include the controversial Super League and how he regretted his decision to switch to this over the traditional form. There is also some interesting points of view of the Broncos without Wayne Bennett as coach, Gambling, Benji Marshall, Petero Civoniceva and why he decided to retire while still at the top of his form.

There is a sample chapter on Scribd here if you want to check out how Lockyer writes http://www.scribd.com/doc/64040992/Autobiography-by-Darren-Lockyer-Sample-Chapter

This book will appeal not only to fans of Lockyer, but also those interested in the history of Rugby League.
Posted by Scott Wilson at 12:51 AM