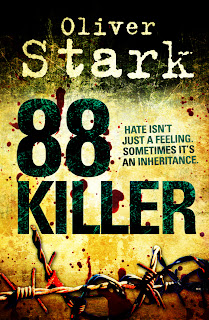 Tom Harper and Denise Levene return in this fantastic new thriller from Oliver Stark. In a brand new case, full of twists and turns, Harper and Levene hunt a serial killer on the streets of New York.

When the body of a young white male is discovered in a Harlem alleyway, NYPD detective, Tom Harper, is not convinced this is a straightforward homicide case. Determined to discover the truth, Harper investigates a spate of similar murders across the city with the help of police psychologist, Denise Levene. But Denise is battling her own demons, as Tom knows all too well.

The realization that a serial killer could be on the prowl seems like frighteningly familiar territory to Tom and Denise. But hatred and fear take on many forms and Tom has never come across a case quite like this...

Oliver Stark made his first attempt at crime fiction at the age of sixteen. Needless to say, this never reached publication. After trying a wide variety of jobs he finally gave in to his passion for reading and went on to study and then teach literature. Oliver now lives in London with his wife and children. Visit the author's website: http://www.oliverstark.co.uk.

88 Killer is the story over an eighteen day period, beginning with the abduction of a young girl and leading on until the case is solver by Detective Tom Harper of the NYPD. Harper is currently investigating two homicides and believes that there is a possibility that the three cases are linked.

One of the other main characters, Dr. Denise Levern, is a psychologist who was kidnapped and held prisoner. While she is a trained psychologist, this was just as traumatic for her as it would be for any normal person, so she is still recovering from it...

One of the scariest and disturbing things about 88 Killer is that the story could very well be based on a true event. This is what makes the story an emotional rollercoaster and disturbing read. The action is fast paced and compelling, as along with the good guys we race to nail the killer.

Stark employs a writing technique that adds suspense and intrigues, having much of the narration from the point of view of the killer, while keeping their identity a complete mystery to the reader. This makes for some interesting reading. As Tom tears around seeking to find the killer, Denise and the father of the kidnapped girl try a more cerebral approach, and we of the cyber age learn yet again the wonder of the library system.

This was a great read and I can’t wait to read more by this author.