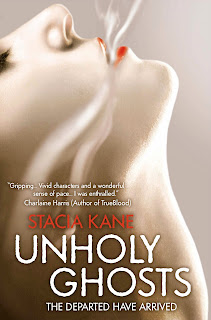 The world is not the way it was. The dead have risen and constantly attack the living. The powerful Church of Real Truth, in charge since the government fell, has sworn to reimburse citizens being harassed by the deceased. Consequently, there are many claims of hauntings from those hoping to profit.

Enter Chess Putnam, a fully-tattooed witch and freewheeling Debunker and ghost hunter. She′s got a real talent for nailing the human liars or banishing the wicked dead. But she′s keeping a dark secret from the Church: a little drug problem that′s landed her in hot and dangerous water.

Chess owes a murderous drug lord named Bump a lot of money. And Bump wants immediate payback. All Chess has to do is dispatch a very nasty species of undead from an old airport. But the job involves black magic, human sacrifice, a nefarious demonic creature, and crossing swords with enough wicked energy to wipe out a city of souls.

Toss in lust with a rival gang leader and a dangerous attraction to Bump′s ruthless enforcer, and Chess begins to wonder if the rush is really worth it. Hell, yeah.

"Gripping... Vivid characters, superior world-building and a wonderful sense of pace... I was enthralled. The protagonist Chess is a treasure. The characters are complex and indelible, the plot is fascinating, and I can hardly wait for another book..." Charlaine Harris

Unholy Ghosts is a really dark urban fantasy with a very original plot and cast of characters. If you’ve never read an urban fantasy before then Stacia’s trilogy is an excellent introduction in this new world.

The plot is about the Earth in the aftermath of a ghost invasion in 1997. A religious cult known as “the Church of Truth”, saved humanity, but at a great cost. All other current religions died out and the Church of Truth has taken on the role as government, army and salvation. The Church is based on the Truth and they practice it every day with magical rites like banishing and warding spells. Most of the magic is only allowed for church employees and one of those is the main character heroine Chess Putnam.

Chess is a broken woman with many flaws, including being a drug addict of the worst kind. She lives in a Triumph city in a district known as Downside, which is overrun by pimps, drug dealers and dozens of gangs. Chess owes money to a drug dealer and ends up working under the watchful eye of a hired thug called Terrible. Without giving away anymore, I’d say that the adventure and relationship between the two is most entertaining and believable.

The novel flowed so well that I finished it in a day and now have to eagerly await the next two books in the trilogy.
Posted by Scott Wilson at 1:32 AM