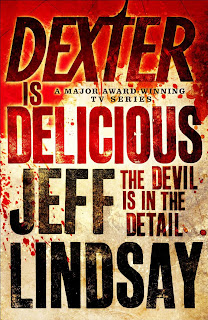 Dexter is Delicious #5
Jeff Lindsay
ISBN 1409113477(978-140-911347-8)
RRP $32.99
Release Date: September 2010
Orion Fiction Paperback (234 x 153)
Everything's changing for our friendly neighbourhood serial killer. As if getting married wasn't enough to complete his nice-guy persona, Dex is now the proud father of a baby girl. But even if fatherhood is distracting Dexter from his midnight excursions to rid Miami of a few more lowlifes, there's no let-up at work. Two young girls are missing - and it's not long before one of the bodies turns up, partially eaten. But as Dexter and Miami PD's finest investigate, Dex can't shake the feeling that somebody's watching him... At home, there's no rest for the wicked. His stepchildren are clamouring to learn how to control their bloodlust and Dexter must train up his young apprentices. But to do that, he'll have to find the missing girl, find out who's tailing him and survive a dark journey into a underground community who really have a taste for death.

The plot centres around Dexter’s rethinking his concept of his life, now that he has his own baby girl. Dexter wants to be rid of “The Dark Passanger,” and become a normal father to his little baby girl and two stepchildren. That being said, the inner turmoil, and torment Dexter faced in the previous four books continues through this novel.
Rather than hunting down solitary criminals to dispense Dexter’s special brand of justice upon, an elusive coven of cannibals lurking in the background, wanting to invite Dexter to dinner, as the main course. This style is drastically different from the first four instalments, but it works quite well, given the new relationship between Dexter and his stepchildren, or should I say apprentices.
One of the most disturbing elements to this story is not any overly graphically written scene but more that Jeff Lindsay conducted research into cannibalism for this novel and the protagonists are based on real life groups and people. That being said, the expertly intertwined dark humour and thrills run through the novel as we’ve come to expect from a Dexter story.
Without giving too much away, Mr. Lindsay has left the ending wide open for a sequel, so don’t worry about this being the last book in the series.
Posted by Scott Wilson at 8:58 PM