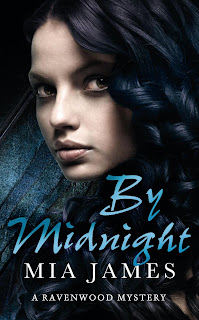 April Dunne is not impressed. She's had to move from Edinburgh to London with her parents, leaving behind her school, her friends...her entire life, basically. Ravenwood, her new school, might be a prestigious academy for gifted super-rich super-smart students but there's more going on there than meets the eye. Practical jokes on new students are normal, but when her new friend Gabriel saves her from... something... in Highgate Cemetery and then she discovers that a murder took place just yards away from where she had been standing, April has to wonder if something more sinister is going on. And whether she's going to live through it...

If you like vampires, romance and Sherlock Holmes then look out for By Midnight with its eerie thrill where you’ll be asking who, what, when, where and how. It’s not like Twilight so for anyone who hates or likes it don’t try making this your substitute or turning your back on it, instead it’s more on the discovery of April the main character and the secrets no one will explain. And don’t fret there are still hot vampire boys, bitchy and snide vampire girls and a Goth friend to top it off. I like it and hope that it’s given a chance in the True Blood and Twilight infested world.
Posted by Scott Wilson at 12:22 AM