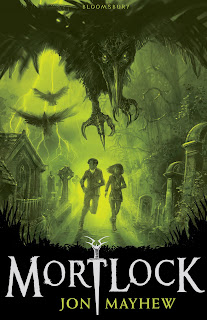 Every now and then, a gentle scratching made Josie flinch and pull the bedclothes closer round her.

Josie is a knife-thrower in a magician's stage act, her brother Alfie is an undertaker's assistant. Neither orphan knows of the other's existence. Until, that is, three terrible Aunts descend on the girl's house and imprison her guardian, the Great Cardamom. His dying act is to pass the girl a note with clues to the secret he carries to his grave. Cardamom was one of three explorers on an expedition to locate the legendary Amarant, a plant with power over life and death. Now, pursued by flesh-eating crow-like ghuls, brother and sister must decode the message and save themselves from its sinister legacy.

Jon Mayhew is a man with a dark imagination, who has always loved writing and storytelling. An English teacher (to children and teenagers) for 20 years, he now works as a specialist teacher for children with autism. He has four children himself and, when neither teaching nor writing, he plays in ceilidh bands and runs marathons.

Mortlock, published by Bloomsbury, is his first novel. Jon lives between the ancient cities of Chester and Liverpool.

The cover’s fun and Gothic. The book itself it isn’t too long or short and surprisingly I can see any age group and gender reading it. Though I hope, no parents read it to their 4 year old for bed.

It is an interesting tale that is set in the 1800 century and is based around the choices of three adventurous men. The prose is quirky and fun, and in the time it took me to read it, I was highly entertained with the trilling plots and creative characters. Most of the chapters of ghoul-laden mystery adventure story start with a traditional verse that tells of coffins, gallows, clay-cold lips, white bones or worms. The story contains many elements of your classic horror story, although written for a teenage audience.

Expect not just one simple adventure but a multitude of sub-individual plots. Each encounter introduces you to other colourful characters at a breakneck speed. Hold on to your seats as you will travel between worlds and meet the living dead and demons.
If you pass it in the stores, I highly recommend you read at least the back cover, that should be enough to convince you to purchase this novel.
Posted by Scott Wilson at 12:48 AM