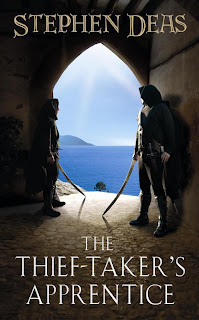 A teenage thief becomes a teenage assassin and must live with the consequences.
Berren has lived in the city all his life. He has made his way as a thief, paying a little of what he earns to the Fagin like master of their band. But there is a twist to this tale of a thief.One day Berren goes to watch an execution of three thieves. He watches as the thief-taker takes his reward and decides to try and steal the prize. He fails. The young thief is taken. But the thief-taker spots something in Berren. And the boy reminds him of someone as well. Berren becomes his apprentice.And is introduced to a world of shadows, deceit and corruption behind the streets he thought he knew.

Stephen Deas is an electrical engineer working in the aerospace and defence industries. His first novel THE ADAMANTINE PALACE has sold in a number of countries - it was sold in the US after a fierce auction and was pre-empted in Gernany.

Stephen Deas departs from his usual style of writing with The Thief Taker’s Apprentice by losing the political intrigue and depth of the structure of the society and heirachy in his debut YA novel. As a writer myself, I find switching between writing for a mature audience and YA audience to be quite refreshing. No doubt, Stephen probably finds the change appealing himself. The only problem that an author finds with doing this is possibly alienating the casual reader who may not be willing to read a book labelled as being for a younger audience.

The Thief Taker’s Apprentice was still very well written and full of action and adventure, albeit, less the more serious elements of Dea’s other Dragon novels. The characters are lacking some of the depth that they had in Adamantine, but the story still flows along smoothly.

Readers will recognise the world in Dea’s new book as that we came to know in his last two books, but on another continent and different culture. The story sees the young apprentice being taken under the wing of an exiled prince and sets the scene for another book or two in the future.

I enjoyed this novel and am looking forward to finding out more about the dynamic duo in the next instalment.
Posted by Scott Wilson at 1:45 AM