Book Review: Sourdough and Other Stories By Angela Slatter 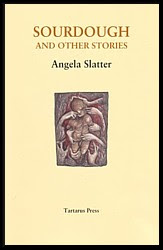 Angela Slatter is a Brisbane-based writer of speculative fiction (that’s in Australia, by the way). Over the years she’s done many things in order to avoid being a writer, including administering an MBA program and studying law – it’s hard to say which was worse. But now she’s given all that up and embraced the writerly and all it entails (poverty, depression, rejection, talking to herself, living on two-minute noodles and generally being an inveterate liar). http://angelaslatter.com/about/

Sourdough is a collection of 17 short stories including : 'Introduction' by Robert Shearman, 'The Shadow Tree', 'Gallowberries', 'Little Radish', 'Dibblespin', 'The Navigator', 'The Angel Wood', 'Ash', 'The Story of Ink', 'Lost Things', 'A Good Husband', 'A Porcelain Soul', 'The Bones Remember Everything', 'Sourdough', 'Sister, Sister', 'Lavender and Lychgates', 'Under the Mountain, 'Afterword' by Jeff VanderMeer.

It is a shame that the initial print run was only 300 copies as Angela has compiled a pretty impressive group of stories into this collection. If you like enjoy fairytales then this is the book for you, well not if you are looking for the airey fairy Disney type tales.

Sourdough is a collection of interconnected stories flowing into each other and reading almost like a complete novel rather than distant or different themed tales. Many of the short stories in this collection dealt with female protagonists with a ethereal feel to the imagery.

Slatter’s writing is exquisite and very vivid, she really is a master storyteller.

There are so many excellent tales in the volume and it makes it difficult to single out my favourite. Angela is a majestic wordsmith and her writing flows along so smoothly that each story blends into the other.

The collection opens with The Shadow Tree, a haunting and vivid tale written in third person and follows the tragic story of being an outsider and exile.

Some of the key stories to talk about are, Sister, Sister, which sees the husband of a lovely princess inexplicably leave her for the princesses evil and beastly sister, talk about a twisted freak. Does leave you wondering about the true nature of the princess though if her sister isn't human. Is the princess a monster as well, and if not, why is her sister such a stark contrast of nature and appearance.

A number of the stories deal with the old element of fairy tales under the genre of witches, both good and evil. The title story, Sourdough, could be compared to snow white where true love is triumphant over the evilness and dark nature of witchcraft. Gallowberries and Ash are two other stories that have witchcraft as the main theme. If you don’t like witches, then these three stories won’t be for you.

There are some darker stories that flow into each other, The Story of Ink and Lost Things. These are definetly not the kind of fairy tales that you would read to the kids before bed, but would be popular with the Emo culture. I can imagine a gothic book club sitting around listening to some dark and gloomy music, discussing how much they could relate to these tales.

If you like tales about lycanthropy, then Dibblespin will appeal to your senses. We have Grandpa Ezza, a bright-eyed bird, Grandma Pandy a large toad and Grandma Finkel the squirell and the adventures of their family. A nice quaint little story, unlike the darker stories later in the book.

A Good Husband is set in The Lake of the Mari-Morgan and has elements of the supernatural, sprinkled with beautiful narratives that draw the reader in and really makes you feel the tranquillity of the pool. Not knowing the exact nature, or even name of the creature lining in the pool adds to the mystery of this tale.
One of my favourites is A Porcelain Soul, such a beautiful title. It is also one of the longer stories in the collection and is a unique story about the Dollmaker’s Guild and their creations.

The Bones Remember Everything is another first person story with a story within a story.

Lavender and Lychgates is also another story written in the first person, with vivid imagery such as “No rolling acres of peaceful grass for our dead, but instead a labyrinth, a riotous mix of flora and stone, life and death”.
Posted by Scott Wilson at 10:15 PM